Ballet is an art of extremes. As such, the risk factors are high among dancers for developing chronic injury and weakened tissues throughout the lower half of their bodies. About 60% of ballet injuries affect the legs, hips, ankles or feet. Lateral ankle sprains and Posterior Ankle Impingement Syndrome, or the pinching sensation felt during repeated floor or barre work as the heel bone comes into contact with the talus bone, are chief among them.

By the age of 12, ballet dancers are generally considered ready to begin learning the en pointe technique which utilizes the unnatural convergence of the tibia, talus, and calcaneus to lock the ankles in place.

While we do know this position may facilitate injury, prior to the advent of advanced CT imaging podiatrists had no method of accurately determining the exact anatomical position of either bones or tissue in this position.

CurveBeam, founded in 2009, designs and manufactures Cone Beam CT imaging equipment for the orthopedic and podiatric specialties. In 2012 CurveBeam’s pedCAT system received official clearance from the FDA, and in 2013, CE Mark approval. With the implementation of tools such as the pedCAT and CubeVue, CurveBeam’s custom visualization software, researchers finally have the capability to help ballet teachers better understand the demands of this position before introducing it to young students.

“Attaining the full en pointe position requires contributions from movements between the bones in the foot. Examples of such movements include sliding between the talus and the navicular, the navicular and the medial cuneiform, and the medial cuneiform and the first metatarsal. These small increments of motion combine to provide approximately 30% of the plantar flexion range.”

“In addition, it is noteworthy that the talus shifts slightly anterior from under the tibia as the ankle-foot complex moves en pointe. This subtlety arises because the converging tibia, talus, and calcaneus form a fulcrum that applies an anterior force to the talus, somewhat like a watermelon seed being squeezed from between one’s thumb and forefinger.”

Recently, Dr. Russell took to an advanced open MR scanner to review the upright and weight bearing position of uninjured ankles in six university-level dancers who had been dancing for an average of 13 years, and dancing en pointe for an average of seven years. 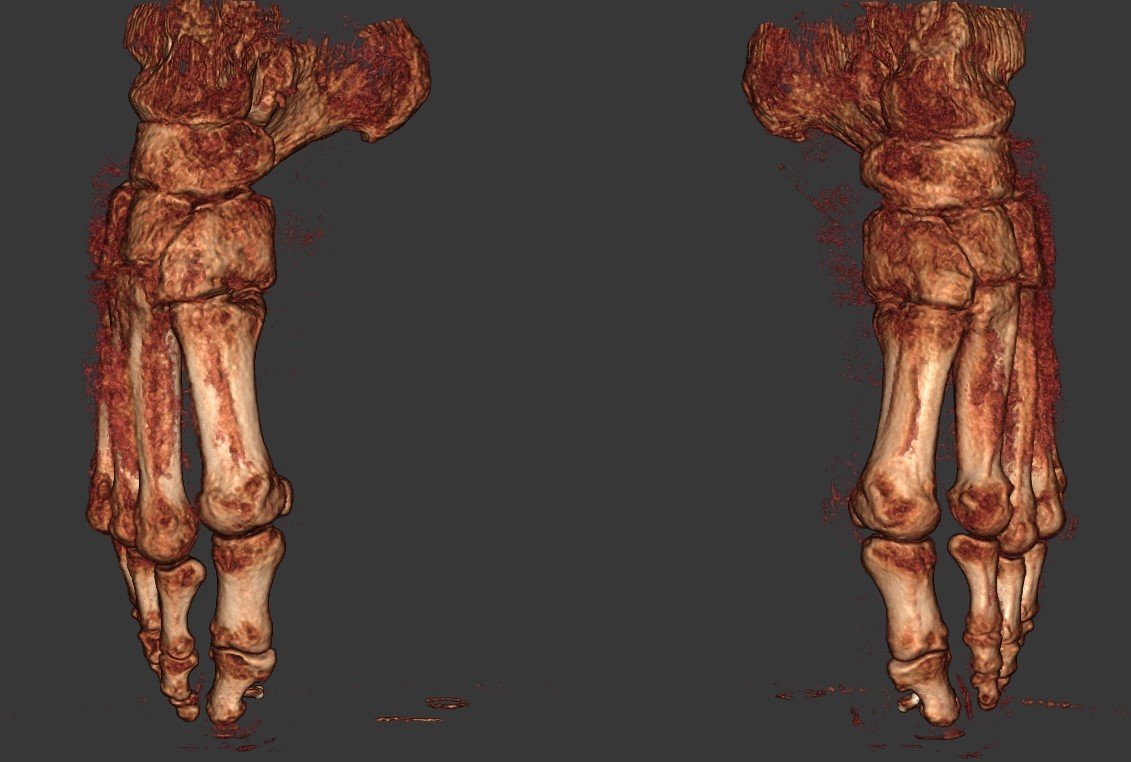 It’s an interesting find, and begs the question: do these conditions increase the likelihood of ballet dancers developing ankle osteochondritis or osteoarthritis?

Not only do advanced imaging systems such as the CurveBeam pedCAT – which was not used in this particular study – reveal the bones’ proper anatomic alignment, but they also enable a close investigation of cartilage quality, which isn’t possible with traditional MR imaging. Bilateral, weight bearing three-dimensional views of the foot and ankle are therefore the most cogent means for specialists to create comprehensive treatment regimens and surgeons to better visualize their surgery plans for better operation outcomes.

Most importantly, however, is Dr. Russell’s recent study confirms the use of orthopedic imaging to examine pointe dancers’ ankles in detail will only continue to offer more insight into the demands placed on the ankle by dancing in this way, ultimately leading to safer instruction, more accurate treatment of injuries, and faster recovery times.