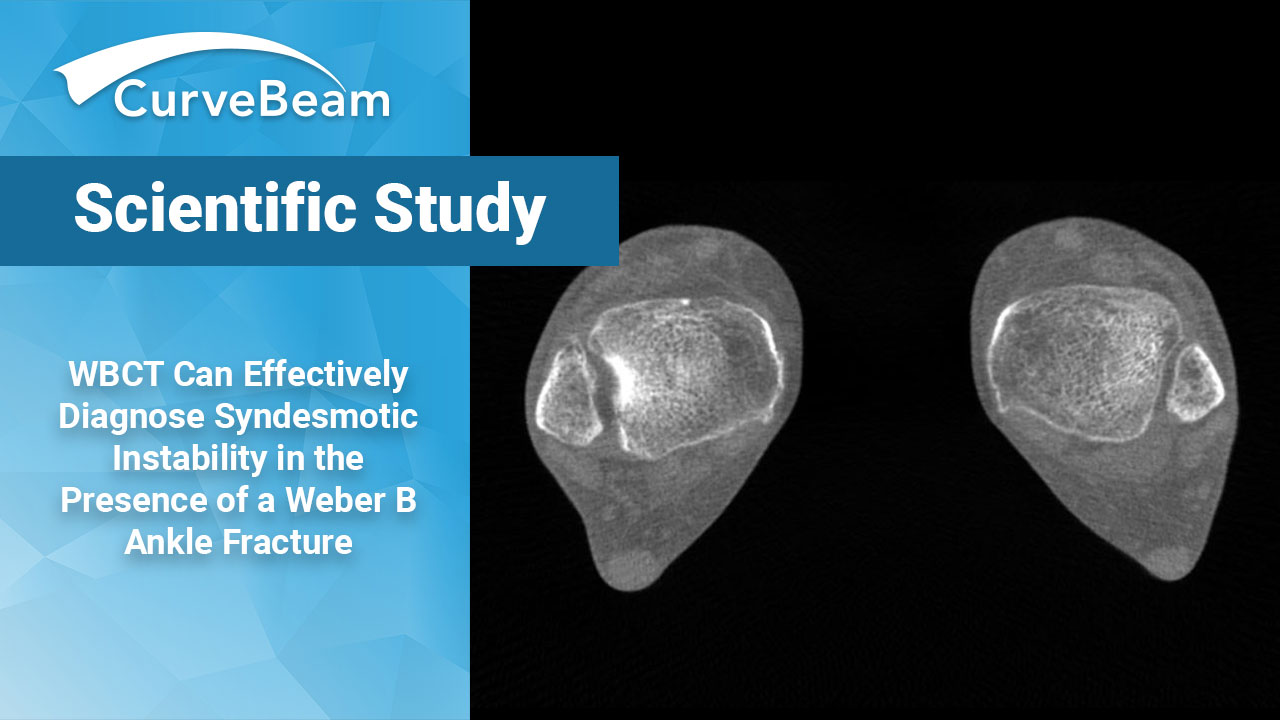 Historically, syndesmotic instability accompanied in patients with Weber B lateral malleolar ankle fractures is very difficult to diagnose. Most patients will undergo some form of intraoperative stress evaluation of the syndesmosis, though more information is generally needed on how to diagnose the fracture without medial clear space (MCS) distance on the initial radiographs.

The following one-dimensional (1D) and 2D measurements were taken on both the injured and uninjured ankles: distal syndesmosis in the axial plane (including distance (1D) and area (2D) 1cm above the tibial plafond and included fibular rotation, tibiofibular distance measured at the anterior, middle, and posterior aspect of the distal tibiofibular articulation, and the syndesmotic area. Lateral malleolar fracture displacement was measured on the sagittal plane, and fibular shortening was measured on the coronal plane as represented by the distance between the fibular tip and the tibial plafond. MCS distance was measured on the mid-coronal CT slice for each patient as well.

In patients with unilateral syndesmotic instability and Weber B ankle fractures, all WBCT measurements were significantly greater than the uninjured side, except MCS distance, syndesmotic area, and anterior and posterior tibiofibular distance. Additionally, syndesmosis volume spanning from the tibial plafond to 5cm proximally had the largest area under the curve of 0.96 (sensitivity = 90%, specificity = 95%), which indicated an outstanding diagnostic test, followed by syndesmosis volume up to 3cm proximally (area under the curve = 0.91; sensitivity = 90%; specificity – 90%). Apart from the MCS volume and distal fibular tip to tibial plafond distance, the control group showed no side-to-side difference in any parameter.

The study concluded that WBCT can effectively diagnose syndesmotic instability in the presence of a Weber B ankle fracture among patients with a symmetric MCS and who would otherwise not necessarily undergo surgical intervention. 3D volume measurements have a higher sensitivity than traditional distance measurements such as WB X-Ray, which lacks the sensitivity needed to diagnose subtle instability; or MRI, which readily identifies distal syndesmosis ligamentous injuries but not instability, and bony anatomy is often obscured in the acute trauma setting due to bony edema. Non-weight bearing conventional CT can be used to visualize syndesmotic alignment and bony detail but only does so unilaterally and without the patient under natural weight bearing circumstances. WBCT systems, such as CurveBeam’s HiRise, solves these issues by providing bilateral, high-resolution, 3D images which allow for an accurate diagnosis quickly and conveniently.

Researchers also noted that WBCT can be useful when the tibiotalar relationship appears to be intact but clinical concern for syndesmotic instability exists, which may necessitate surgical stabilization. Additional studies are necessary to evaluate the degree of syndesmotic asymmetry that clinically justifies repair and the effect of associated fractures of the posterior malleolus on such measurements.

Click here to watch a webinar about a study out of Denmark that showed WBCT of patients with potentially unstable Weber B fractures found additional clinical findings that the initial X-Ray exams missed.