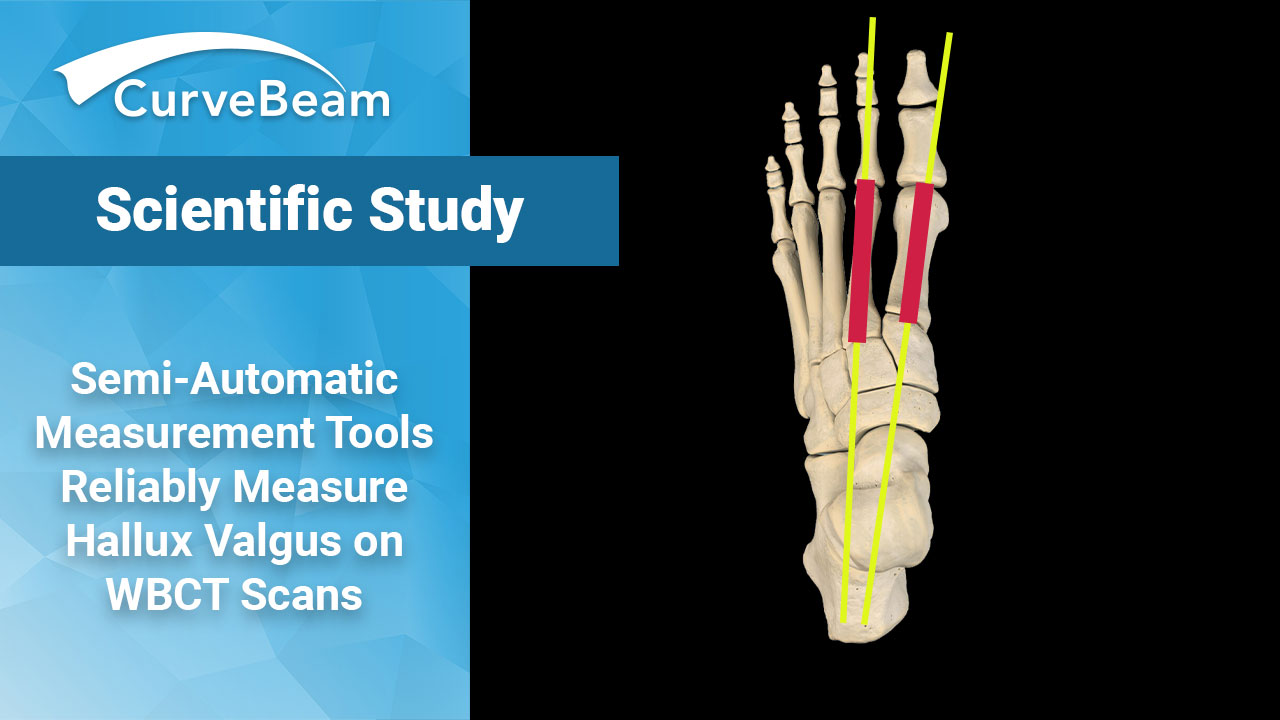 The advent of weight bearing CT (WBCT) has led to the foot & ankle specialty to discuss whether it is time to update the standard of care for diagnosing, planning treatment for, and assessing outcomes for Hallux Valgus (HV). A recent study shows new software tools designed specifically for making semi-automated measurements on WBCT scans are reliable and reproducible when it comes to making common HV measurements, making the transition from traditional weight bearing X-Rays to WBCT that much smoother.

The study compared WBCT scans of 26 HV feet with a control group was also assessed consisting of 19 feet.

The same surgeon investigators then performed the semi-automatic 3D measurements in a third-party software solution. The longitudinal axis estimate was generated automatically for each patient-specific metatarsal and phalanx model by first finding the center of the specific bone in proximal to distal orientation and by analyzing its cross sections at different locations. In sequence, the software selected the straight-line representative for the center of the bone by applying robust line-fitting routines. The software then automatically registered a mathematical model of the foot and ankle on the image and computed the location of measurement landmarks and longitudinal axes of bones of interest.

According to Pearson’s coefficient, there is a strong positive linear correlation for HVA, IMA, and IPA when comparing semi-automatic and manual measuring on patients with HV. Utilizing Bland-Altman plots, excellent agreement between semi-automatic and manual measurements for HVA, IMA and IPA was found. The graph showed that the mean difference between measurements for HVA was 3.11 degrees, with a 95% confidence interval of (1.26 – 4.97), for IMA it was 1.09 degrees, with CI (0.52 – 1.65) and for IPA it was 0.93 degrees, with CI (0.06 – 1.93) indicating a high correlation between the parameters calculated from both measurement methods and a strong agreement between the readers and the software.

Researchers noted that the technology is still under development and is currently restricted to few research centers, resulting in the need for future studies to discover how WBCT can integrate into daily clinical practice and speed up the decision-making process.

Researchers further noted that fully automated segmentation would represent a crucial advance in evaluating HV and other complex foot deformities. CurveBeam’s Autometrics platform, which is based on deep machine learning, will provide fully automated HV measurements. Autometrics is investigational only and is not available for sale.