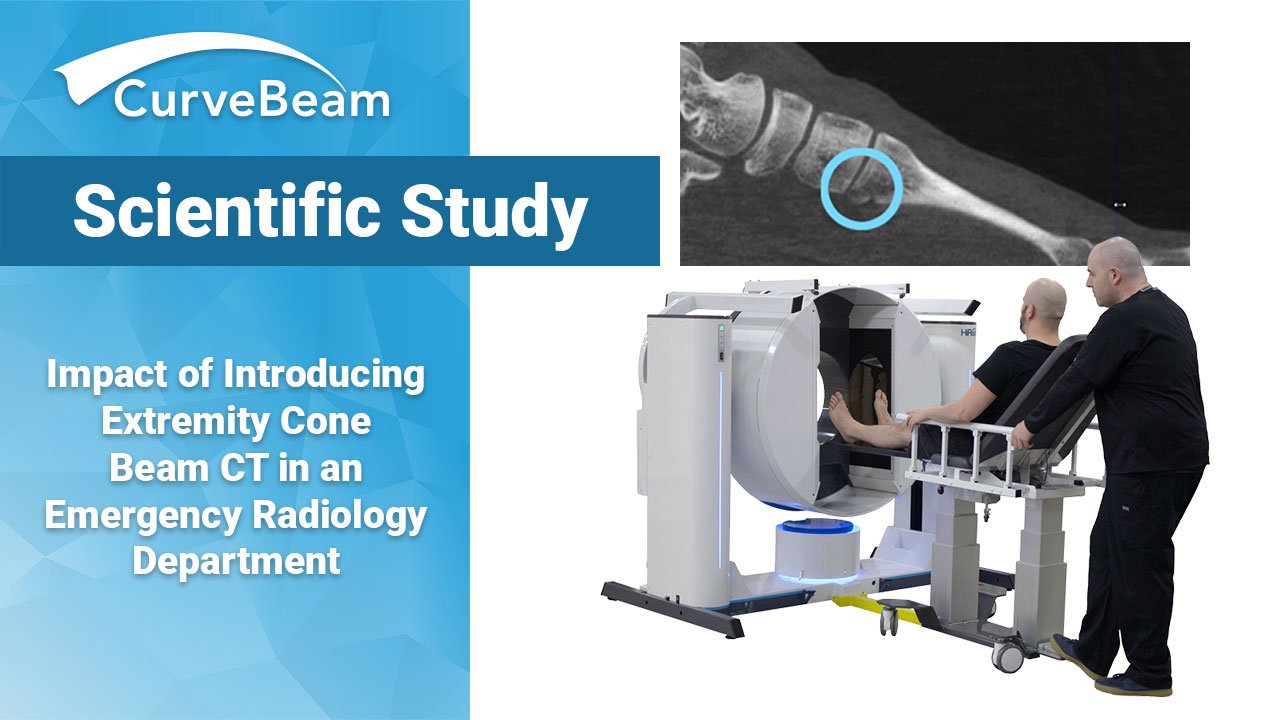 Introducing a cone beam CT (CBCT) device into a French emergency room’s radiology department resulted in up to a 62.9% decrease in radiation dose to patients as compared to conventional medical CT (MDCT) and a 23.6% increase in patient turnover over MDCT, a recent study found.

Thibaut Jacques et al at the Department of Musculoskeletal Radiology at the University Hospital of Lille, France, which sees volumes of 18,000 to 20,000 radiographs a year, questioned whether introducing CBCT into the emergency room’s radiology department would reduce radiation dose, increase patient turnover, and incur any practical consequences.

CBCT is an emerging technology within radiology. Utilizing a conical X-Ray beam and flat-panel detector, systems such as CurveBeam’s LineUP only require a single rotation around the specified extremity to provide submillimetric, 3D, isotropic images enabling a higher turnover rate for doctors and allowing more patients to be seen in a day. In addition, CBCT image quality is comparable to MDCT and current data suggests a 200% to 700% reduction in radiation dose over MDCT, according to the study.

Only conventional MDCT was available in the first phase of the study. Ultra-high resolution settings of 120 kV and 220-250 mAs, provided 0.6mm standard resolution slices or 0.4mm slices (which is more irradiating but gives better bone image quality). The second phase included the option of CBCT with the parameters of 80-90 kV and 2.8 – 5.6 mAs, which provided 0.26mm thick slice images. MDCT settings remained the same across both study periods. The choice between the two modalities was left to the radiologist’s discretion for each patient once CBCT was introduced. Only MDCT scans of the regions in which the CBCT were capable of scanning (foot and ankle, knee, hand, wrist, and elbow) were included in this study, and patients who had radiographs taken elsewhere were excluded from the turnover analysis.

5,067 patients referred from the emergency department underwent radiographs of one or more extremities in phase 1, of which 166 (3.28%) underwent complementary cross-sectional imaging which matched the inclusion criteria. Phase 2 saw 5,530 patients, of which 224(4.05%), a breakdown of 85 MDCT and 130 CBCT, matched the inclusion criteria; a significant increase in rate of imaging. The mean dose length product (DLP), or radiation emitted, for phase 1 was 210.3 ± 133.6 mGy.cm vs 138.4 ± 92.66 mGy.cm in phase 2, a 34.2% reduction after the introduction of CBCT in the radiology department.

A Shift in Radiologists’ Modality Preference

Turnover was significantly accelerated in phase 2 by the shorter stay required for CBCT, thanks to the dedicated supplementary CBCT device in the emergency and traumatology departments, allowing the MDCT device to be remain available for true emergencies. These findings which aligned with a recent CBCT study in which scheduled weight bearing imaging decreased acquisition time by 77% compared to MDCT. Turnover rate remained the same across both periods for MDCT.

Researchers noted radiologists began favoring CBCT exams to MDCT in phase 2, potentially due to ease of patient positioning for indications with a high rate of clinical and/or radiographic doubt, such as scaphoid or Lisfranc joint fractures.

CBCT could replace X-Ray for first line assessment in joints requiring more than two views and subject to frequent false negatives on standard radiography to minimize dose and improve diagnostic performance, researchers posited, and suggested this comparison could be the focus of future studies.