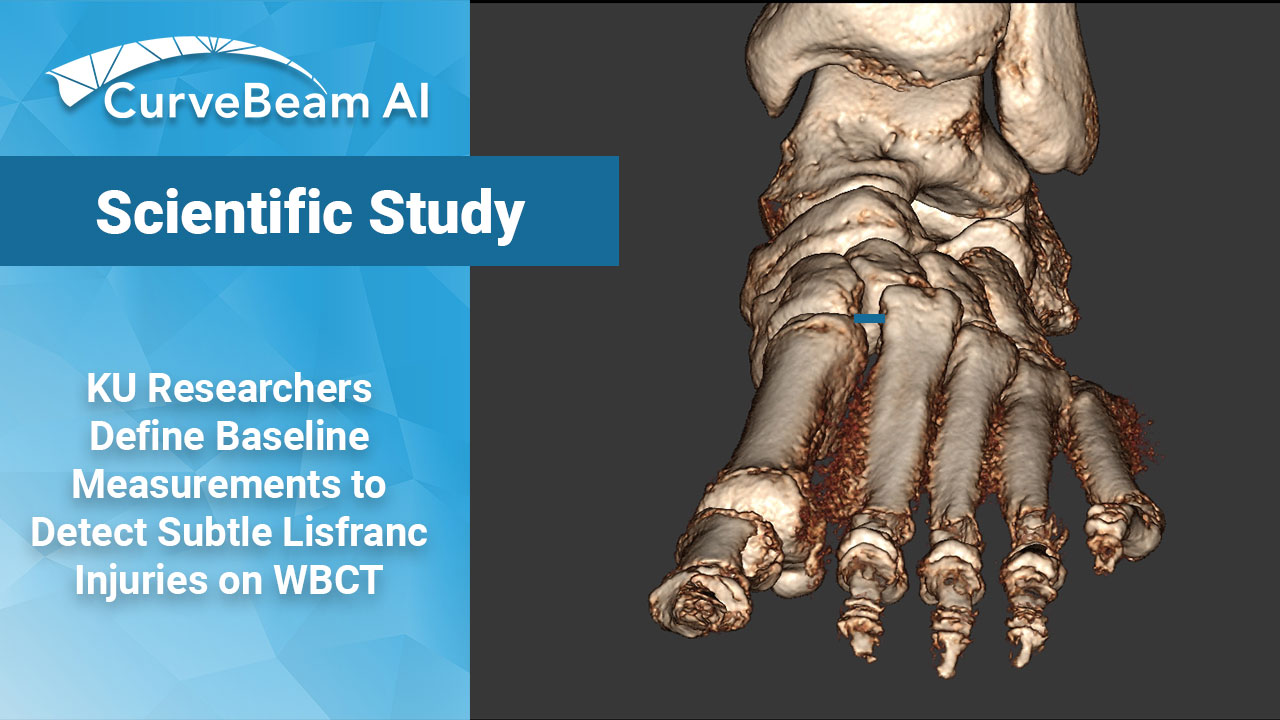 One of the most common foot & ankle sports injuries is a Lisfranc, though it is often underdiagnosed. The Lisfranc ligamentous complex (LLC) is made up of the TMT, intertarsal, and intermetatarsal joints. The Lisfranc ligament is the strongest, plantar-most ligament between the second metatarsal base and medial cuneiform. Left untreated, it can lead to chronic pain and instability.

Evaluating subtle injuries in the midfoot with the current standard of care, X-Ray, can be challenging because of the overlapping bones of the midfoot.

There are a handful of studies showing WBCT can detect LLC injuries of varying complexity. A study by Sripanich et al established a reproducible protocol for measuring the second metatarsal base to medial cuneiform distance (M2-C1).

Dr. Spencer Falcon et al. out of the University of Kansas Medical Center, Kansas City, KS, attempted to advance the research by defining baseline anatomical values on WBCT to aid in diagnosing subtle injuries. They reported an average M2-C1 measurement of 3.6mm in uninjured feet and 5.4mm in injured feet a 1.8mm difference. This was similar to previous studies, which  found a 1.5mm difference under partial weight bearing conditions.

Researchers conducted a retrospective chart review of 56 patients (112 feet) who had undergone WBCT of the bilateral lower extremities and were indicated for either a clinically diagnosed Lisfranc injury or clinically diagnosed tibiofibular syndesmosis injury. Evaluation of the LLC included: distance from base of first metatarsal to base of second metatarsal (Base M1-M2), distance of the base of the second metatarsal to medial cuneiform (M2-C1), inter-cuneiform distance, the presence of first and second tarsometatarsal (TMT) joint incongruity in the axial view, and sagittal descent between the bases of the first and fifth metatarsal joint as a measure of curvature or collapse of the midfoot arch (most inferior point of first metatarsal base to most inferior point of fifth metatarsal base).

Researchers concluded that WBCT has high utility in defining Lisfranc injury in identifying Lisfranc injuries particularly when comparing injured and uninjured sides. This is due to WBCT’s excellent diagnostic ability of the M2-C1 measurement.

Researchers stated that future studies or technique guides could aim to define exact starting and end points for Lisfranc parameter measurements to increase interobserver reliability and further ease of comparison between studies. By defining baseline anatomic measurements for Lisfranc complex parameters in the patient population, normal parameters for comparison when evaluating potential subtle injuries can be formed.