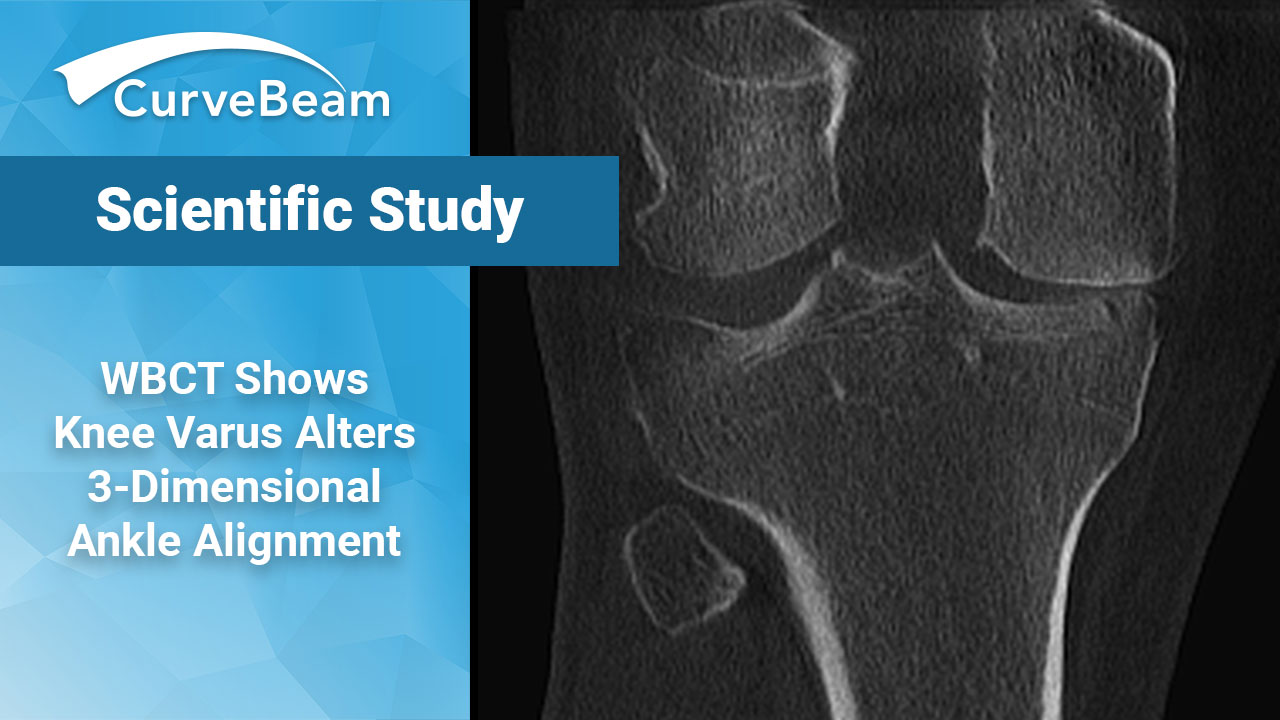 When treating knee osteoarthritis (OA), the most common OA disease affecting approximately 300 million people worldwide, it is important to correct lower limb alignment including the foot. While the current standard of care includes assessing lower limb alignment in an upright position, radiographs come short in capturing the true 3D characteristics of the deformity.

The main pathology of knee OA is three-dimensional, with the main changes occurring on the coronal plane as varus or valgus deformities. It is known that the alignment also changes at the ankle joint in the hindfoot. It is believed that these changes in the hindfoot are compensatory changes to restore the natural hip-knee-ankle coronal alignment.

The study compared a total of 45 limbs in 25 patients with knee OA. The patients underwent both WBCT and radiography for the whole lower limb in the standing position. Patients with valgus knee, a history of foot or knee trauma, and inflammatory disease such as rheumatoid arthritis were excluded.

Joint angles were calculated on both sets of images. The degree of knee OA was classified into four groups (KL-I, KL-II, KL-III, KL-IV) according to Kellgren-Lawrence (KL) classification. Researchers also looked at the characteristics or correlations between knee and ankle joint in each group.

All levels of significance in the statistical analysis of this study were set at less than 5%. The intra- and inter-observer reliabilities for the three-dimensional joint angles were assessed by calculating intraclass correlation coefficient (ICC) based on 12 randomly selected lower limbs. The measurements were made blind by one orthopedic surgeon and one physical therapist and repeated after a 3-month interval by one physical therapist. After the reliability was determined to be acceptable according to the previous report, three-dimensional joint angles for all 45 lower limbs were assessed by a single physical therapist.

The findings from the study did not support the researchers’ hypothesis that varus deformity of the knee joint causes changes in hindfoot alignment in the sagittal and axial plane. However, significant correlations were found in the coronal plane between knee joint varus angle and talocrural inversion angle in all of the lower limbs.

The function of the hindfoot under weight bearing is known to compensate for the alignment of the knee joint, which is specifically compensated by the subtalar joint. Calcaneal rotation had been shown to strongly relate to foot stability and it is speculated that the subtalar joint complex, including the talocrural joint, affects a kinetic chain from the foot to the knee and hip joints, which influences the alignment of the lower extremities.

The team discovered when they looked at each grade of knee OA, it became clear that each grade had its own characteristic hindfoot alignment due to the effect of knee joint varus.

The study found the knee joint internal rotation angle was also related to the talocrural joint dorsiflexion angle, suggesting that there is a 3D relationship.

It was noted that although the relationship between the knee joint and the hindfoot was found only on the axial plane, the study was still considered useful because it recognized the usefulness of WBCT for a comprehensive assessment of multiple large joints in weight bearing. Also, the study provided new insights into how to approach patients with knee OA in a non-operative manner, such as optimizing insole design.

Researchers said future areas of study include examining the relationship between hip and knee joint angle and the evaluation of the lower limb under different loading conditions.