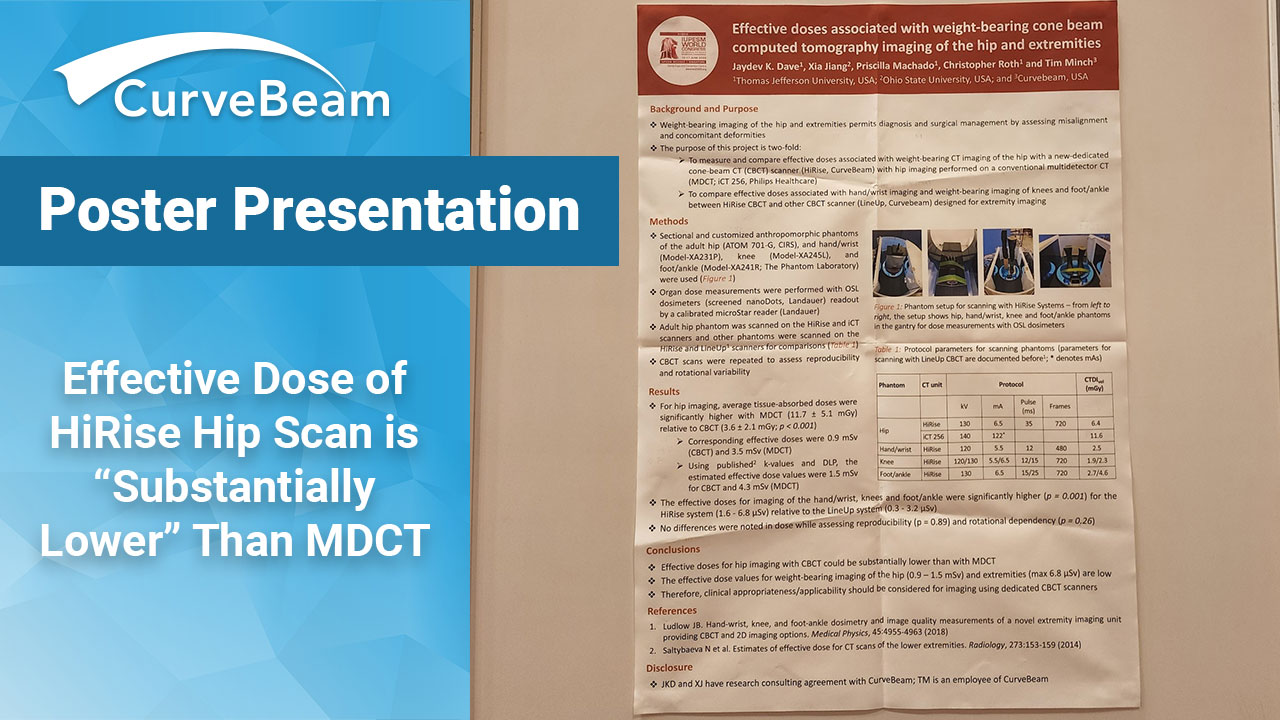 A team of researchers led by Jaydev Dave, PhD, Associate Professor of Radiology at Thomas Jefferson University, set out to measure and compare effective radiation doses associated with WBCT imaging of the hip with the CurveBeam HiRise to hip imaging performed on a conventional multidetector CT (MDCT).

The HiRise is CurveBeam’s third generation WBCT system and can scan the entire lower extremities, including hip and pelvis.

Sectional and customized anthropomorphic phantoms of the adult hip, hand/wrist, knee, and foot/ankle were used. Organ dose measurements were performed with OSL dosimeters readout by a calibrated microStar reader. An adult hip phantom (ATOM 701-G, CIRS) was scanned on the HiRise and an MDCT scanner (iCT 256, Philips Healthcare) and other phantoms were scanned on the HiRise and CurveBeam’s second generation WBCT system, LineUP, for comparisons. Finally, the scans were repeated to assess reproducibility and rotational variability.

“Since the HiRise covers the hip/pelvis region in addition to all extremities covered by the LineUP system, proportionately higher kV and mAs settings have been employed for applicable anatomies in order to capture the necessary diagnostic information,” said CurveBeam President & CEO Arun Singh, in response to the study results. “While this does result in increased radiation dose to the patient, the gains in diagnostic content in weight bearing position far outweigh the additional risk. Keep in mind, the overall radiation dose of a HiRise scan is still significantly lower than a comparable MDCT scan.”

The effective doses for hip imaging with WBCT could be substantially lower than with MDCT, the researchers concluded. The effective dose values for weight bearing imaging of the hip (0.9 – 1.5 mSv) and extremities (max 0.0068 mSv) are low which indicates they have a significant clinical appropriateness/applicability and should be considered for imaging over MDCT.