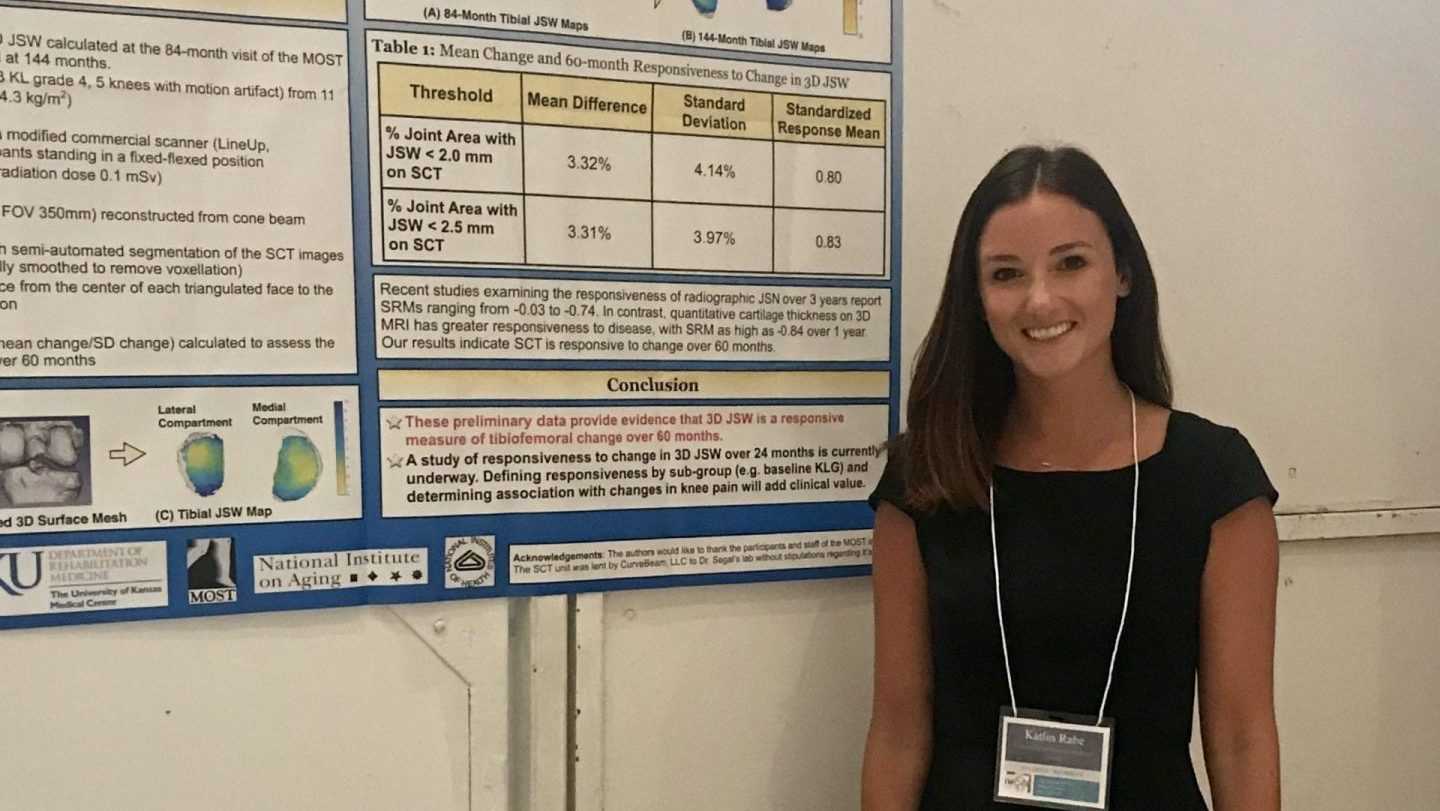 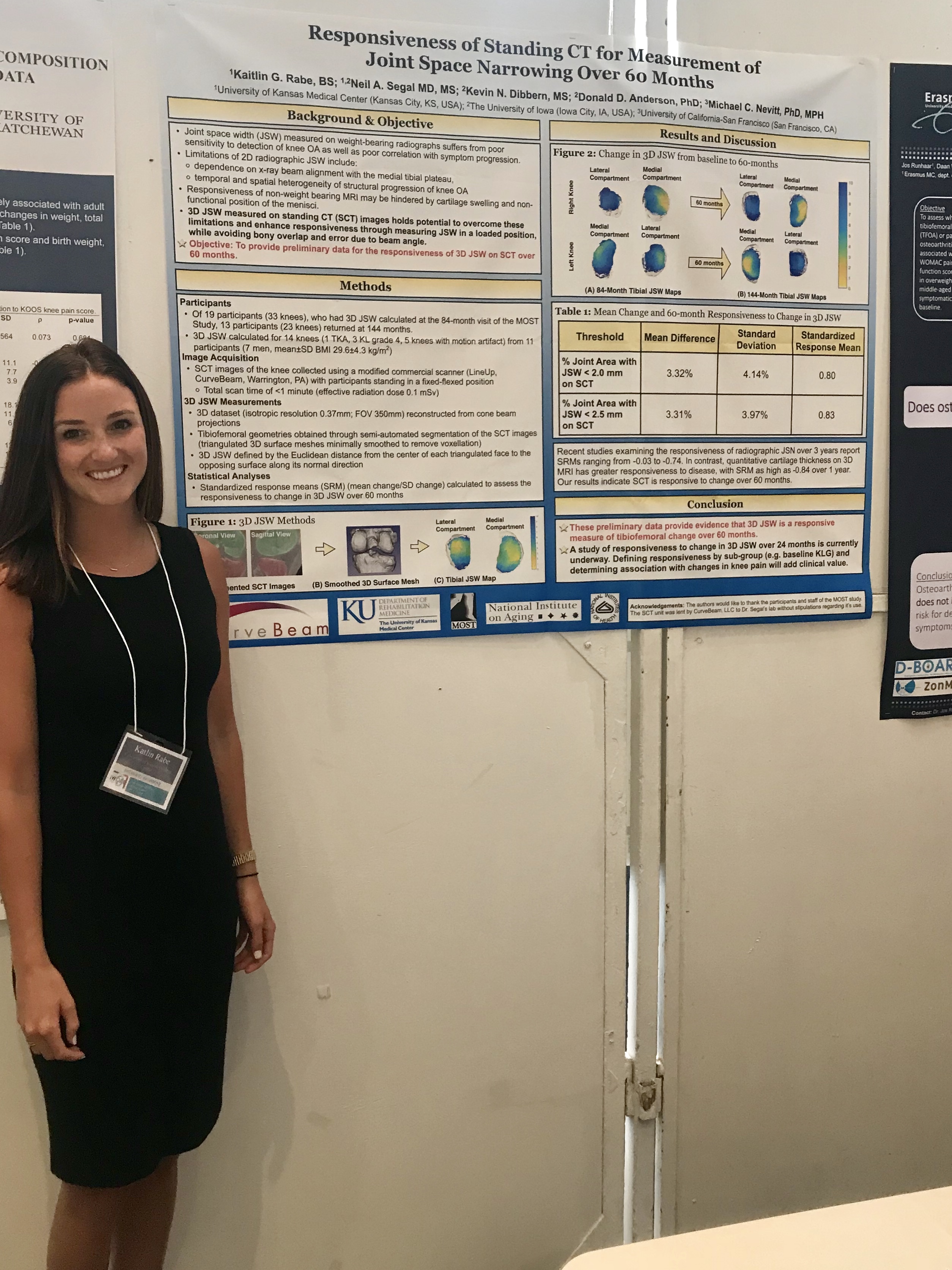 Imaging is a critical tool in the diagnosis and management of osteoarthritis. The International Workshop on Osteoarthritis Imaging (IOWAI) was created to offer opportunities for osteoarthritis investigators to discuss issues and share findings related to imaging. This Workshop was first held in Ainring, Germany in 2017 and is now held annually at various locations in Europe and North America. This year’s IOWAI will be held in Menton, France, on July 5-8. Thought leaders and influencers from academia, regulatory and funding agencies, and the medical equipment industry will be in attendance.

Kaitlin Rabe, Biomedical Research Assistant at the University of Kansas Medical Center, will be presenting a poster titled, “Responsiveness of Standing CT for Measurement of Knee Joint Space Narrowing Over 60 Months.” The study was sponsored by the National Institutes of Health, the University of Iowa, and the University of California, San Francisco. 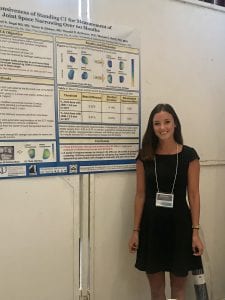 In the workshop, Ms. Rabe will discuss the limitations of two-dimensional radiography when measuring joint space width (JSW). These 2D weight-bearing radiographs traditionally suffer from poor sensitivity when used to detect knee osteoarthritis and produce poor correlation with symptom progression.

Much of these issues can be attributed to the inherent limitations in the 2D radiography procedure, such as the dependence on X-ray beam alignment with the medial tibial plateau. In addition, the temporal and spatial heterogeneity of structural progression of knee OA limits the responsiveness of radiographic JSW to diagnose disease progression. MRI offers important advantages over 2D radiography, but is typically non-weight-bearing.

Standing CT (SCT) imaging holds the potential to overcome these limitations and enhance responsiveness in three-dimensional JSW measurements. This is because JSW is measured in a loaded position while avoiding bony overlap and error due to beam angle variations.

In her workshop, Ms. Rabe will provide preliminary data for the responsiveness of 3D JSW on SCT over 60 months using an early prototype of the CurveBeam LineUP system. The LineUP is a compact, ultra-low dose Cone Beam CT imaging system specifically designed for the orthopedic and podiatric specialties. Preliminary data calculated for 33 knees from 19 participants over 60 months support the hypothesis that 3D JSW exhibits a greater responsiveness than has been reported for radiography, similar to that for quantitative cartilage thickness measured on MRI over 12-months.

To get all the details on this important study, be sure to attend Ms. Rabe’s workshop at the IOWAI in Menton, France, July 5-8. For more details on accommodations and the all the workshops at this important conference, go to https://www.iwoai.org/.

Join CurveBeam AI for an evening of food, fun, and a little competition. A golf…