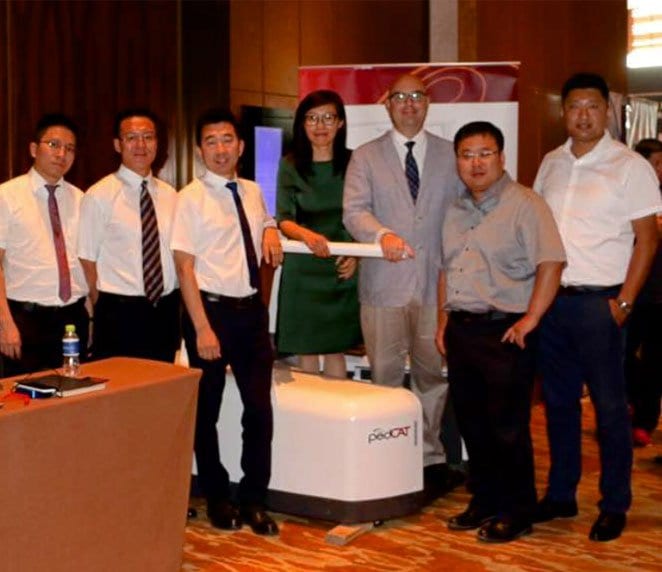 Founded in 2009, the news of CurveBeam and its advanced, compact 3D imaging devices spread quickly among orthopedic and podiatric specialists. Just three years later, the CurveBeam pedCAT system cleared the FDA. Without losing any momentum, CurveBeam Europe LTD’s office was opened in London in 2013. Even with all of these notable accomplishments, 2016 shines as the most impressive year for CurveBeam thus far. From our President and CEO, Arun Singh, receiving a lifetime achievement award to our expansion into the Asian market, 2016 has been a year to remember.

Take a look at the top five most significant moments for CurveBeam in 2016.

“In recognition and appreciation of [his] visionary contributions to the advancement of Cone Beam Computed Tomography,” the American Association of Dental Maxillofacial Radiographic Technicians presented Arun Singh with the Carl Gugino Lifetime

Achievement Award on October 7th. The award was presented to him by Mr. Jerry Peck, who owns dental imaging centers in the San Francisco area. In his speech, Mr. Peck described when Arun installed a Tomax system in one of his offices 27 years ago. He described how Arun worked overnight to create the software code Mr. Peck needed to run the calculations  for the measurements he was looking for.

“This is the type of person, how bright, smart, ingenious, he is. I mean, overnight, all of a sudden, the program is written,” Mr. Peck said.

Mr. Peck went on to describe how Arun cofounded Imaging Sciences and developed both the CommCAT and I-CAT, which were game changers for dental professionals.

“Today, you look at what is the most successful CBCT company in the world, and you built it Arun,” Mr. Peck said.

Focusing on the applications of the weight bearing cone beam CT, the first pedCAT Weight Bearing CT Scientific User’s Meeting was held at the 2016 Foot International in Berlin, Germany. “We can’t have non-weight bearing CTs and say anything about alignment – that’s over. What do we want to measure, and how do we know what we’re measuring represents reality?” said Dr. Charles Saltzman as he emphasized the importance of WBCT at the meeting.

The Kent State University College of Podiatric Medicine became the first podiatry school to implement the revolutionary pedCAT cone beam CT imaging system. “Kent State University is proud to be the first facility in the Northeast Ohio region to provide this state-of-the-art imaging modality,” said Dr. Allan Boike, Dean and Professor of Foot and Ankle Surgery at KSUCPM. “The CurveBeam pedCAT will allow the college to improve the foot and ankle health of the community while providing the highest quality education for our students and research opportunities for our faculty and residents.” 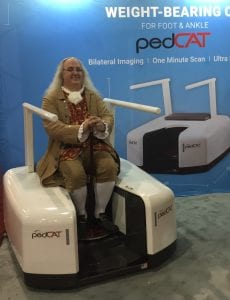 4. Ben Franklin and Susan B. Anthony See the pedCAT System

Philadelphia is a city well known for its rich history, and CurveBeam is proud to be in its next chapter, as the company is now headquartered in this remarkable town. At the APMA “The National” meeting this summer, historical interpreters acting as Ben Franklin and Susan B. Anthony visited the CurveBeam booth to learn more about the revolutionary pedCAT technology.

Not only has CurveBeam expanded its domestic presence, the use of the technology worldwide is also growing. The pedCAT system received notable attention at the 2016 National Foot & Ankle Surgery Symposium in Qingdao, China, as CurveBeam’s Chinese partners presented the weight bearing CT technology to the audience of medical professionals.

It’s been quite a ride since our original team pioneered cone beam CT imaging technology for the podiatric specialty. As we gear up to expand into new orthopedic specialties, we could not be more excited for what 2017 will bring!