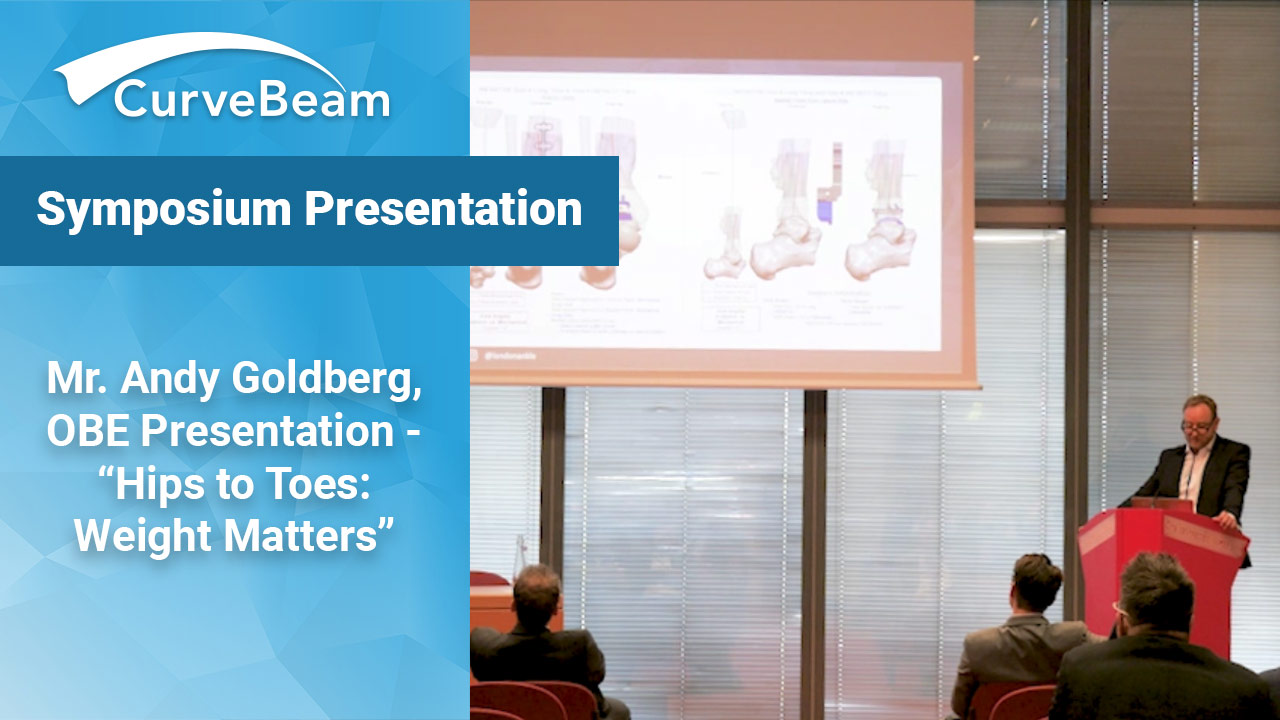 Internal rotation of the hip could be the root cause of ankle pathology, and weight bearing 3D views of the alignment from hip to toe could be critical to properly address lower extremity deformities, Mr. Andy Goldberg, OBE, a foot & ankle surgeon in London, said in a recent podium presentation.

“The talk I’m going to give is not about the experience we’ve had in the past, but rather where I see us moving to in the future,” he explained.

Mr. Goldberg spoke at the International WBCT Society Symposium at the European Foot and Ankle Society (EFAS) Congress in Lyon, France, in October 2021.

Mr. Goldberg shared that his grandmother’s hip surgery after a fall inspired him to investigate total leg alignment. The open reduction internal fixation (ORIF) procedure left her femur internally rotated, and  resulted in a new toeing-in on her affected side. Within six months, she progressed to a massive valgus deformity in her knee. She passed away later with a planar valgus foot and a valgus knee “having lived in agony.”

Realizing he was moving into the realm of limb reconstruction, he asked his colleagues to start including hip information in their analysis.

“They all looked at me like some sort of weirdo,” he said. “Why would a foot and ankle surgeon even look up above the knee?”

But he continued to ask questions to connect what is known about femoral version and how it could impact function in foot and ankle.

Studies show that there is major variability in lower limb alignment within healthy subjects (Bellemans 2012). However, most surgeons still use 2D radiographs to measure axial plane alignment which is known to be inaccurate (Maderbacher 2021).

These findings took him to his own total ankle replacement cases. Looking at conventional alignment rods, rotation of the jig introduces change to varus/valgus coronal plane alignment. For him, that was a major flaw. He stopped using standard instrumentation and moved exclusively patient specific guides for total ankle arthroplasties.

Fortunately, weight bearing CT (WBCT) technology has progressed from foot and ankle only systems to include the knees. In a previous study by Mr. Goldberg et al, WBCTs of the lower leg revealed that, of the ~150 total ankle replacements evaluated, huge variation exists in relation from the knee to the foot. Tibial tuberosity and TMA ranged from 0 – 44 degrees. Tibial torsion ranged from 11 – 62 degrees, and tibial tuberosity was unreliable.

The launch of the HiRise, newest generation of WBCT, has enabled him to collect the data on the hip. “That suddenly gave us the opportunity of seeing [the entire lower limb] 3-dimensionally, and what was for me, the most exciting advancement in orthopedics bar none,” Mr. Goldberg said.

“So, what became even more exciting is the concept or the notion of having auto-measurements, or Autometrics, and that’s where I think the world is heading.” For his last 2,200 patients, he has started measuring range of hip motion (IR/ER rotation) and correlating to common foot and ankle pathologies. “There is a huge association between, for example, limited internal rotation of the hip and ankle sprains…. And when you fix their ankles, because you haven’t addressed the root cause, namely the hip pathology, they are at increased risk of recurrence,” Mr. Goldberg said. “And that is a really, really important patient group to explain that to, and unless you examine the hips, you can’t tell that to the patient.”

He plans to publish his findings in the near future.