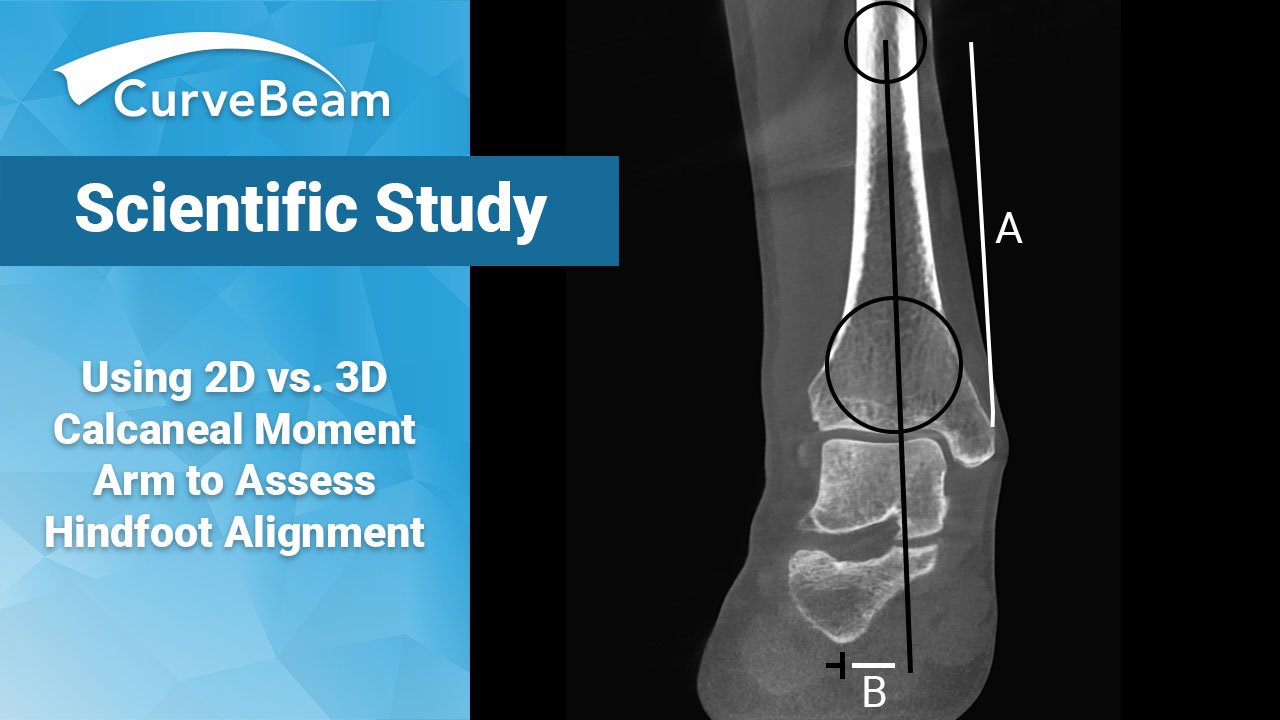 Hindfoot Alignment View (HAV) radiographs, originally described by Saltzman and El-Khoury, have been the standard method for quantitative assessment of hindfoot alignment. However, a recent study showed that measuring 2D calcaneal moment arm measurements on radiographs may overestimate the varus alignment by an average of 3.9mm when compared to a novel calcaneal moment arm method based on WBCT imaging.

Christopher B. Arena, MD et al at the University of Utah compared calcaneal moment arm measurements on radiographs and WBCT in 375 patients and determined that while both methods were highly reliable, WBCT measurements were less susceptible to error even in the presence of hardware and motion artifact.

1) The coronal cut was selected based on the widest tibial diaphyseal distance at the most proximal edge of the image.

2) Circles were placed along the cortical edges along the tibia.

4) The distal aspect of this line was extended to the most inferior portion of the tibial axis.

5) The axial cut is visualized in the plane that depicts the most inferior aspect of the calcaneus; the center was marked and transferred to the previously used coronal cut using the “localizer mode” function.

Hindfoot alignment was then measured using weight bearing HAV radiographs and described by Saltzman and El-Khoury with a 40% magnification correction factor to compare directly to WBCT.

1) Distance A measured on WBCT was increased by 40% (multiplied by 1.4) to become distance C.

3) A line was drawn from the center of the radius of the proximal circle, passing through the distal circle, to the inferior aspect of the tibial axis.

4) A line parallel to the ground was used to measure the distance from the inferior aspect of the calcaneus to the tibial axis (distance D). Varus alignment is represented by a negative value, while valgus alignment was represented by a positive value in millimeters. This value was reduced by 40% (divided by 1.4) and was compared with distance B obtained on WBCT.

The study showed that both radiograph and WBCT modalities can provide consistent HAV measurements.

Researchers found that reliable WBCT measurements could be made regardless of alignment, hardware, and motion artifacts.

However, several issues can arise with radiographs. The assessment of hindfoot alignment using conventional weight bearing radiographs is susceptible to foot/ankle positioning errors (especially in rotation), variations in boney anatomy contribute to misidentification of the “true heel contact point”, and the human calcaneus may demonstrate substantial shape variations and may be misrepresented by a simplified 2D radiographic representation.

WBCT helps solve these issues by utilizing 3-dimensional images of the anatomical boney structures and provides clinically useful information concerning alignment as they are performed under natural standing conditions. WBCT also offers the benefits of increased accuracy which is present in cross-sectional imaging paired with physiologic alignment under weight bearing conditions.

As the year comes to a close we want to wish all of our team,…

Made in America: Countdown to the CurveBeam AI Premiere

MarketScale's Made in America series explores industries that are thriving in the USA. In it's…